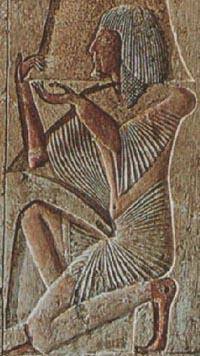 The tomb was discovered in 1996 by the French expedition lead by A. Zivie (cliffs underneath the Bubasteion in Saqara). Conservation works lasted since its discovery to 2003.
The tomb dates back to the reign of king "Ramses II" from the 19th Dynasty (New Kingdom). Its owner served under Ramses the Great as a peace envoy between the Egyptian Empire and the Hittites.
This is the first official opening of the tomb since the completion of the restoration and excavation works that included the consolidation of the mural inscriptions, color fixing and erecting a shelter over the front courtyard to protect the tomb and the inscriptions, as well as installing a new lighting system.
The tomb consists of a limestone front courtyard with two pillars holding inscriptions of the tomb owner in a worshiping position. The western wall has colorful scenes typical of the Ramesside art representing everyday life and religious rituals. Many cartouches bearing the name of "Ramses II" also exist.
The courtyard leads to a rock cut room and contains a rock statue of "Hathor" representing it sorting from the mountain, under its head is a royal statue of Ramses II.
Posted by esplaobs at 5/28/2016 09:03:00 PM