WHAT SOUTHERN STARGAZERS LONG TO SEE IN NORTHERN SKIES BY: BOB KING


Southern objects like Omega Centauri and the Magellanic Clouds make observers in the Northern Hemisphere envious. Today, we turn the tables and find out what those living in negative latitudes would love to see up north. 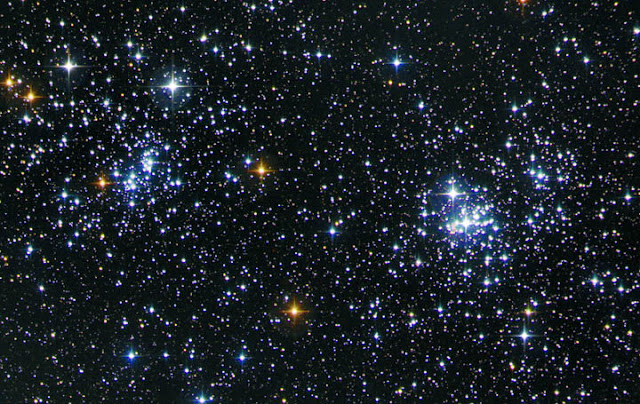 The grass is always greener, right? A lot of us in the Northern Hemisphere have southern sky envy. We pine after Omega Centauri, the Magellanic Clouds, 47 Tucanae, the Southern Cross, and to one day see the Sagittarius Milky Way cross the zenith. Observers below the equator have most of the good stuff, right?


Having lived in one hemisphere for so long, it's easy to lose perspective. That's why I poked around and tried to get a feel for what the other half thought. What do observers in the Southern Hemisphere wish they could see in northern skies? What would I show someone from Sydney if they came for a visit?


Since "southerners" have to put up with the obscure magnitude-5.5 Sigma Octantis as their Pole Star, I figured Polaris would top the list. It was a must-see for some, but the big vote getters were notable deep-sky objects: the M81/82 galaxy pair; the Double Cluster in Perseus (there's nothing quite like it down south, I'm told); the Andromeda and Whirlpool galaxies (M31 and M51); NGC 457 (ET or Owl Cluster); NGC 7000; the North America Nebula; M97 (Owl Nebula); and the Great Hercules Globular, M13. On the last, we all know it doesn't hold a standard candle to Omega Centauri, but with all the good press it's had for the past couple centuries, it remains high on the list. 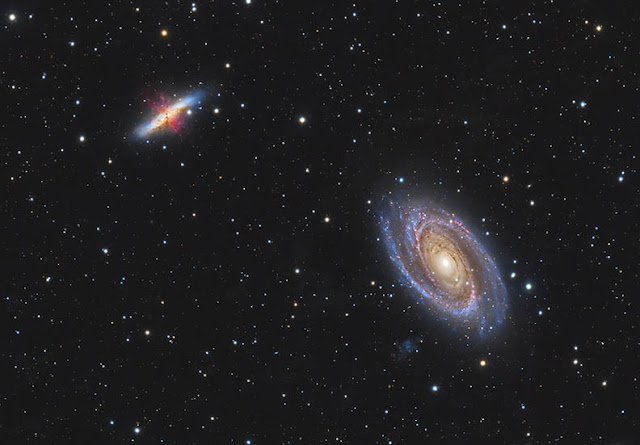 The bright pair of galaxies, M81 (left) and M82 in Ursa Major is another sought-after sight for southern observers.
Erik Guneriussen

"For my money the best sights not visible from significantly south of the celestial equator are the Double Cluster and the M81/M82 pair," wrote Tony Flanders, former Associate Editor at Sky & Telescope. These two were probably the most often mentioned by the other observers I polled.


For northerners, Alpha Centauri, Proxima Centauri, and the triple star, Alpha Crucis, are among the individual stars we'd love to get our eyes on. Southern skywatchers look forward to seeing Mizar, Delta Cephei (the most famous of the Cepheid variables), and the famous quadruple Epsilon Lyrae (aka, the Double Double). Poor seeing often mars the view of Epsilon, which stands only 15°–20° high at culmination. 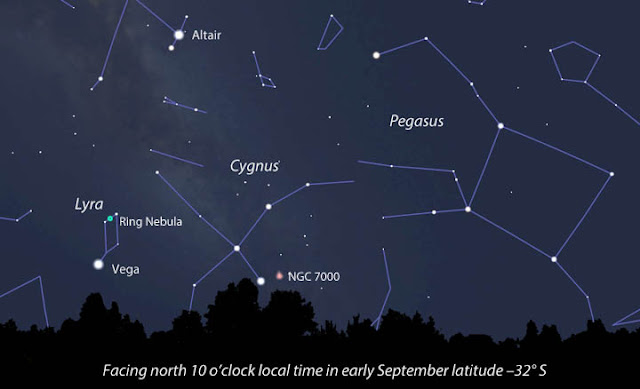 This view of the northern sky from latitude 32° S shows favorite northern constellations battling low altitude the same way Sagittarius and Scorpius do for northerners. For southern observers, these are all winter figures.
Stellarium


While many northern sights are visible from, say, Australia and southern South America, they're often low in the sky and compromised the same way southern deep-sky objects are for northerners. How many times have you wished the Lagoon Nebula or Silver Coin Galaxy (NGC 253) were just 10° higher, if only to save your knees? Southerners suffer similarly. You guys must hunch over for the Ring Nebula (how lucky we are to see it near the zenith!), Andromeda Galaxy, M13, the Triangulum Galaxy (M33), and Auriga's sparking open clusters.


We in the polar-bear hemisphere may be put off by Pegasus flying upside down or Hercules walking on his hands, but observers below the equator have it much worse. Orion, Leo, Lyra, and a host of other constellations are decidedly upside down from Down Under. This fact was appreciated by Glen Chapman, who lived in Sydney, Australia (latitude –33.8° S) before moving to western Kansas in 2008: 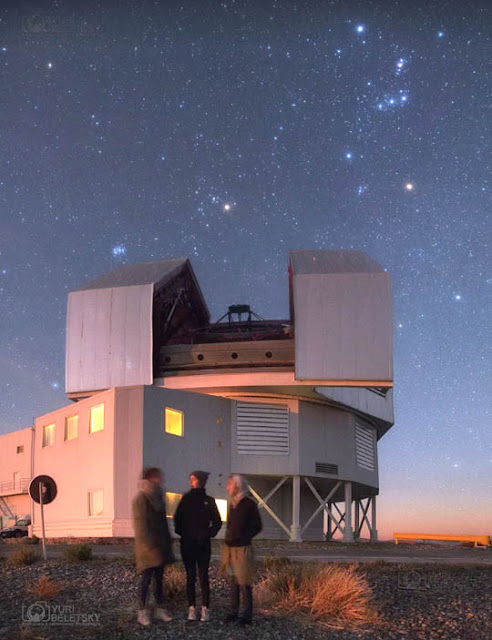 
"As a transplanted southerner I was fascinated with seeing Orion standing right way up." On the plus side, southern skywatchers get to see Pegasus prance from east to west with its head held high and legs pointed down, while Hercules strides across the north with his dignity.


Chapman continued: "M57 was high on the list because we really don't have anything in the south to compare. The LMC (Large Magellanic Cloud) and SMC (Small Magellanic Cloud) often get touted as being far superior. Unfortunately, unless you're under dark skies you really don't get the totality of these two objects. With M31 I get virtually the whole galaxy in one field of view that looks like the traditional idea of a galaxy.


"M51 ended up being one of the first objects I observed. I was astonished to see two galactic cores in the eyepiece and remains to this day a firm favorite. (The) North America Nebula was on my bucket list but I never thought I would get the opportunity to view it (even in the US). A really lovely object. Overall I was keen to observe and identify the northern circumpolar constellations. Ursa Major did not really impress me. But I truly enjoyed identifying Cygnus and Cassiopeia. Even after these years I like to lay back and just imagine Cygnus as a giant swan, wings outstretched flying along the Milky Way." 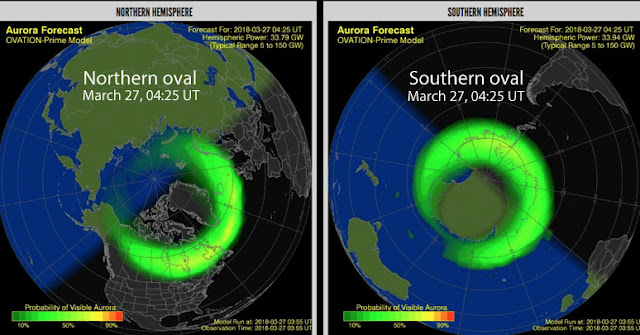 Two auroral ovals crown the Earth as seen in this depiction on March 27, 2018. Notice how the northern oval, even when the aurora isn't particularly active, hovers over a fair amount of populated land, while the southern oval does not — except for Antarctica.
NOAA / SWPC


While I've concentrated mostly on telescopic sights, the Northern Hemisphere has one big drawing card the Southern doesn't — relatively easy access to the aurora. While both the aurora borealis and aurora australis have virtually equal intensities, there's far less populated land within or near the southern auroral oval compared to the northern. Skywatchers in Canada, the northern United States, and Nordic nations routinely witness the spectacle, as do the scant few living in or traveling to Antarctica.

Of course, the aurora is visible from New Zealand, Tasmania, southern South America, and even parts of Australia, but with less frequency and, in general, less intensity. It all has to do with distance from the oval. Similarly, southern skywatchers who don't head north will never complete the Messier catalog with M52, M103, M97 (Owl Nebula), M76, M101, M81/82, and others forever hidden by an immovable horizon.


Here's my list of Top 17 best northern sky sights either invisible or compromised by altitude for southern observers. Most came through polling, a few are my own: 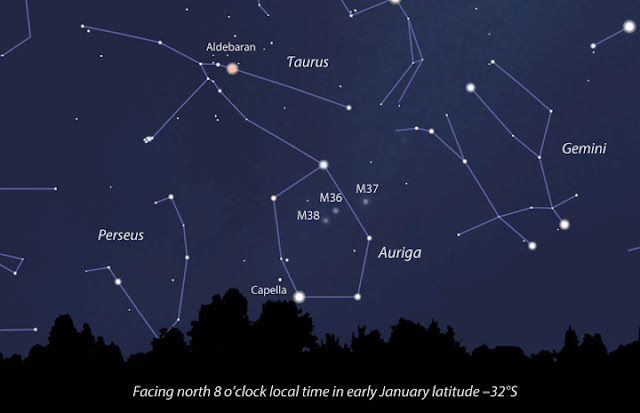 The northern winter constellations cruise low across the northern sky for viewers at southern latitudes. On the plus side, they can be observed in summertime weather.
Stellarium

For a more extensive list, try amateur astronomer Donald Pensack's Northern Objects for Southern Observers, a compilation of 188 northern nuggets. Whichever hemisphere you call home, I hope you'll have the opportunity to visit the other. I guarantee it will be the astronomical adventure of a lifetime.