Mars is now brighter than any star in the sky. This week, the Red Planet surpassed Sirius in apparent luminosity. If you wake up before dawn, you can't help noticing Mars burning through the morning twilight with a distinctive orange glow. This recent picture from Alan Dyer of Gleichen, Alberta, shows what to expect: 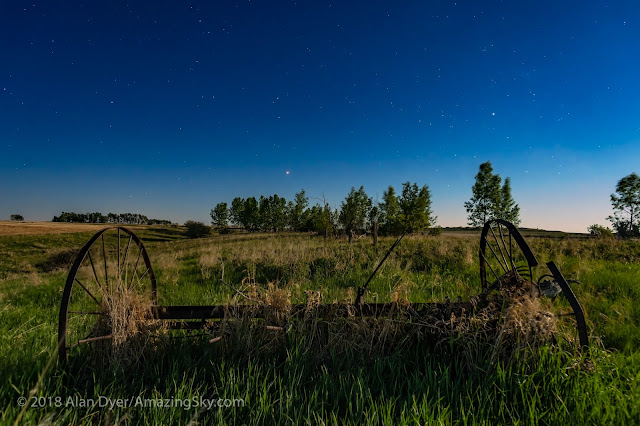 The last time this happened was on Aug. 27, 2003, when Mars famously made its closest approach to Earth in almost 60,000 years. Around the world, people organized "Mars parties" to celebrate the extraordinary size and brightness of the Red Planet. This July will be almost as good with Mars only a few percent farther away than it was during its historic encounter 18 years ago. Between now and then, Mars will triple in brightness, outshining even the giant planet Jupiter. Stay tuned for that!
Posted by esplaobs at 6/08/2018 09:10:00 AM