A SAHARA SUNSET ... IN FINLAND


This week, something strange has been happening to the air in Europe. Dust is blowing across the continent's landscape, coating cars, cities, and snow-capped mountain peaks with a layer of red grit. The Sahara desert is to blame. Unusual weather has carried plumes of North African dust across Europe, with some clouds reaching as far north as Finland. Yesterday, in the Finnish Lapland, Thomas Kast witnessed tendrils of dust in the sunset: 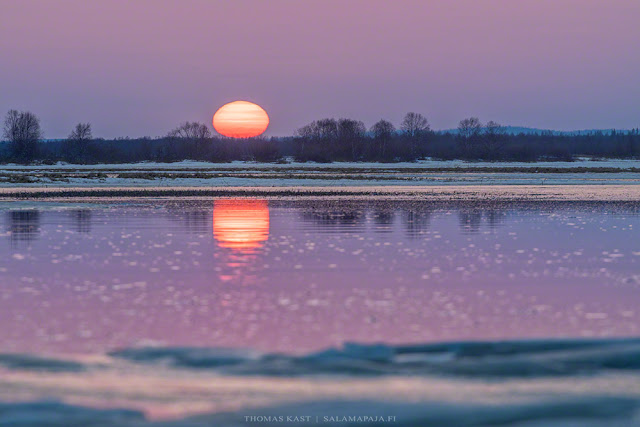 "I was driving north in late afternoon, when the sun started to be visible through what I thought at first to be thin clouds," says Kast. "Then I remembered an article about Sahara dust being in the skies of the Lapland. About 30 minutes before sunset, the solar disk was dark enough for me to see lines of the sand clouds in it. It was a magical sight, something I haven't seen before."

Dust forecast maps prepared by the University of Athens show the air clearing in Europe by April 27-28, albeit with some residual dustiness over Greenland. Crazy sunsets may continue there for some days to come.

As winds shift, the dust will move away from Europe and toward the Atlantic, blowing an even bigger plume toward South America. This is not, in fact, unusual. Every year more than 200 million tons of dust blow from Saharan Africa to the Americas. The dust helps build beaches in the Caribbean, fertilizes soils in the Amazon, and likely plays a role in the suppression of hurricanes.