This weekend, one of the biggest sunspots since thesolar storms of Sept. 2017 is directly facing Earth. AR2738 has a primary core three times wider than our planet and it is creating a wake of magnetic froth on the sun's surface more than 200,000 km long:

Above: An extreme ultraviolet image from NASA's Solar Dynamics Observatory

Since it first appeared one week ago, the behemoth spot has not produced any significant solar flares. However, something interesting is happening to AR2738. It may be splitting apart.

The primary core of sunspot AR2738 is divided by a brilliant canyon of light--also known as a "light bridge"--measuring 20,000 km from end to end. Yesterday, amateur astronomer Martin R. Wise photographed the phenomenon from his backyard observatory in Trenton, Florida. Follow the arrow: 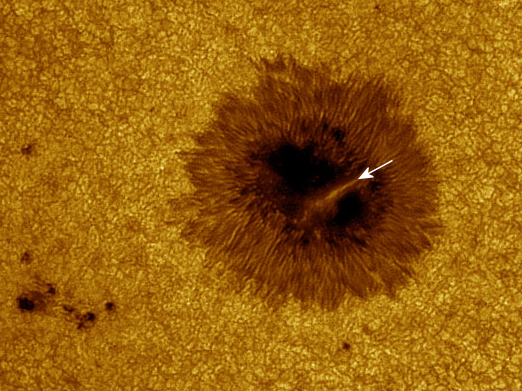 Wise's photo is remarkably detailed. The light bridge is only about 800 km wide--less than the width of Texas. His image captures not only that narrow divide, but also hundreds of Texas-sized granules on the sun's boiling surface
The nature of light bridges is not fully understood. They often herald the break-up of a sunspot. Some research suggests that magnetic fields at the base of a light bridge are busy cross-crossing and reconnecting--the same explosive process that sparks solar flares. Does this mean sunspot AR2738 will explode--or quietly fall apart? No one can say. Readers with solar telescopes are encouraged to monitor developments.