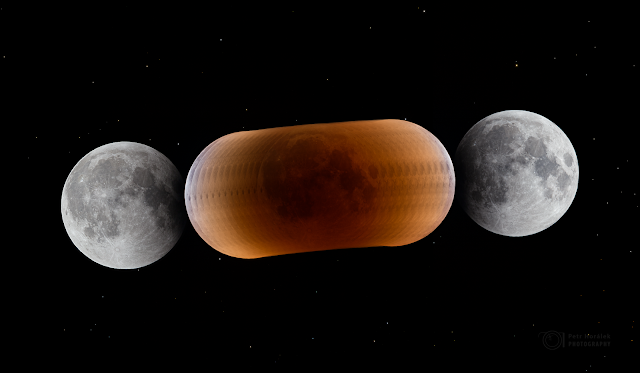 Enjoy the colors of the century’s longest lunar eclipse on 27 July 2018. The Moon was close to its distant point of lunar orbit, making the apogee lunar eclipse. Moreover, as the Moon went through the central part of the shadow, it took over 103 minutes of the total eclipse (the middle sequence). Even if the Moon was deep in the shadow, it didn’t dissapear completely. That’s because of scattered sunlight in Earth’s atmosphere, which sends the longwave part of the sunlight spectrum, the twilight colors, in the shadow. And the Moon gets red. Many observers around the world, including me, also reported „rainbow“ colors of the Moon at the beginning and before the end of the totality. Indeed, the typical orange-red color with a „turquoise“ tint on lunar edge close to the edge of the Earth shadow, made this eclipse very colorful. In fact, it is caused by effect of our ozone. The mosaic was captured over Rhodes Island, Greece. Used Canon 6D, MTO 1100mm/f10.5, ISO 500, 15s exposures on Vixen GP-2 mount (total eclipse) and ISO 200, 1/60s exposures (partial phase).