Dr. Serena Bertone is working as an ISS Crew Instructor at the European Astronaut Center in Cologne.


ISS Crew Instructor Dr. Serena Bertone trains astronauts before their space missions, passing on the ins and outs of space travel. In June, astronaut Alexander Gerst will be the first German commander to fly to the International Space Station. The geophysicist completed his training with Serena at the European Astronaut Center (EAC) in Cologne and will be there soon to further train for his space mission.
The gate opens to the premises of the German Aerospace Center (DLR) in Cologne. Here, in the middle of a forest, on an area measuring 55 hectares, is the EAC that belongs to the European Space Agency (ESA). Planes are constantly flying overhead; Cologne airport is just next door. At the entrance to Building 12 are the flags of European countries. “Around 100 people from all over the world work here,” says Dr. Serena Bertone. Italian-born Bertone joined the EAC six years ago. She trains Europe’s astronauts for their missions at the International Space Station; for more than 20 years, the USA, Russia, Japan and Canada have been taking part in the program, as have eleven European countries under the ESA flag. 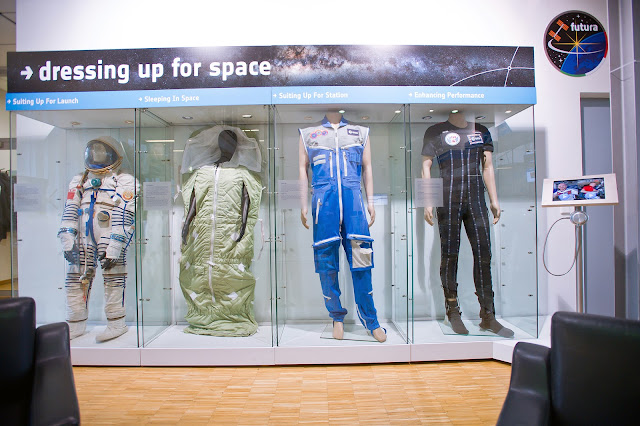 
A gigantic model of the ISS hangs in the foyer of the EAC – it features two massive screens that show how the Earth looks when viewed from the International Space Station and provide insights into the astronauts’ work on board. A group of students is here for a visit and is huddling in front of a display case featuring space suits. The white suit with the big round helmet makes you think of Yuri Gagarin. “This space suit is actually part of the collection belonging to the Russian space station MIR,” says Serena. Next to it is a sleeping bag in military green where astronauts rest during the night. “Gerst” is printed on it in both Russian and Latin letters. “They say this one is very comfortable – unlike this one over here,” she says, pointing to a tight black jumpsuit. Astronauts wear a compression suit to simulate the effects of gravity on the spine and help maintain their balance in zero gravity. “When they work at the ISS, astronauts normally wear these,” says Serena, pointing to a blue sleeveless suit: the ESA logo and colorful emblems adorn the chest area – new patches are designed for each new mission. There are 57 of these colorful symbols, which also adorn the walls in the foyer.


Getting comfy in space

Serena leads the way to the Astronaut Center’s training hall. Detailed replicas of the ISS are displayed in the middle of this huge building. Climbing a small steel staircase and passing through a hatch will take you inside the ten-meter-long European space freighter ATV, a driverless vehicle that transported cargo to the ISS between 2008 and 2015. “Back then, it played a major role for the ESA in the ISS project,” explains Serena. ATV had its own navigation system that could calculate its flight path and thus dock with the ISS. Its capsular portion, which weighed around 7.5 tons, brings to mind the hold of an airplane with all its shelves and belts. The color-coded boxes contained food, water and consumables. If you crawl through the small opening at the end of the module, you’ll get to the other side, i.e. to the Russian part of the ISS. “This is where the astronauts ate and used a treadmill,” says Serena. Its green walls and carpet give the room a cozy feel. “The Russian modules are normally decorated in earth colors,” explains Serena. “Every country designs their systems in line with their personal preferences.”

The Columbus module (picture below) on the opposite side of the hall is the ESA’s current space lab. It has been docked with the ISS for ten years and has its own science lab for performing experiments. Serena climbs into the capsule. The lab is completely white and looks very spacious and modern; it’s seven meters long and 4.5 meters wide. Serena tells us that the tests conducted on board are designed to study the effects of zero gravity on the human body. The astronauts are required to train for two hours a day.

The replicas at the EAC are the perfect tools for preparing the space explorers for their future work at the ISS. “Before a mission, we show the astronauts how the technology and all the equipment works. The astronauts will have to be the resident plumbers and electricians – if something breaks down while they’re in space, they’re the only ones who can fix it,” says Serena. “I’ll be running another training session with Alex in April.” His mission is to install a newly developed system in the ISS. “We’ll practice everything here before he goes,” says the trainer, who also completed her training at the EAC. Before she could call herself an ISS Crew Instructor, she had to learn the ins and outs of space travel and how to pass on that knowledge. 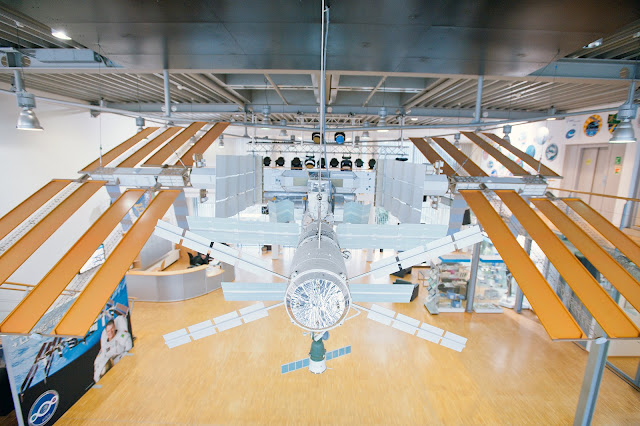 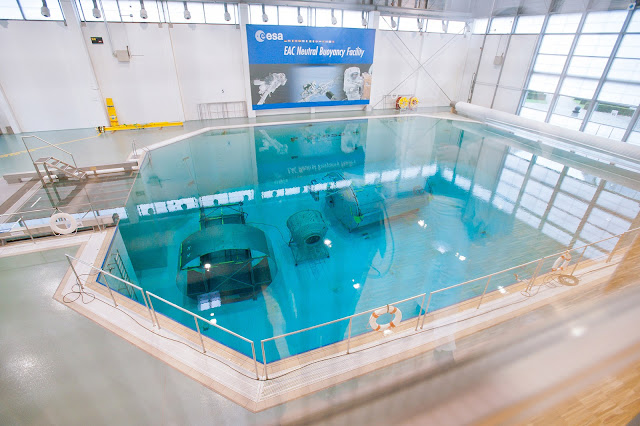 
Training under the stars

We make our way to a classroom, passing by the cafeteria, which is paneled in light-colored wood. A pool can be seen through the floor-to-ceiling windows behind the counter and tables. Can the pool be used during breaks? “Of course not,” laughs Serena. “We use it to show our astronauts how to work when they’re wearing the thick, heavy space suits in zero gravity during a spacewalk.” The EAC has a submerged replica of the Columbus module at a depth of ten meters. “The trainee astronauts have to complete various tasks, including screwing parts together with thick gloves, using tools – and sometimes spend up to seven hours doing so. This exercise is as much a part of basic training as astronomy seminars,” says Serena. All future ESA astronauts have to complete the individual modules before they’re ready to go.

The theory lessons are held in the classroom on the first floor. Two huge screens are used as a board; they’re currently showing the ESA logo. As an astrophysicist, Serena is particularly pleased with the astronomy training she redesigned from the ground up. During their Basic Training, astronauts also train in a planetarium to find out more about the solar system and the stars. “One of the tasks in training is to calculate the space coordinates using the celestial bodies,” says Serena and takes a star chart out of her desk. “During his training at the ZEISS Planetarium in Bochum, Mathias Maurer had to determine his location on Earth simply using the positions of the stars,” she continues. Maurer joined the Astronaut Corps of the ESA in 2017 and will be completing his training this spring. For his four-hour course, Serena put a small tent with a 30 cm window under the dome. “It’s amazing how much you can simulate under the dome!” says the planetarium enthusiast. Maurer’s only means of navigation were the stars he could see through his window. During a virtual flight through the solar system, he found out how it feels to be in a spaceship.


Fit for the spacewalk

Serena also wants to show us the Eurocom room. She takes us back to the first floor, to a no access area. This area is normally off limits to visitors. “We are in constant satellite contact with the International Space Station,” explains Serena, who is also a European Communicator on the Columbus Flight Control team. She puts on her headphones. “This is where we look after the European astronauts and provide them with information when they have questions about the experiments they’re expected to do.” In the small control center with its various screens, we hear someone speaking Russian. “These are the Russian cosmonauts at the ISS. They’re preparing for a spacewalk on Friday,” she says. That’s what the astronauts are most looking forward to. Sometimes there are no spacewalks at all on a mission, and other times there are as many as three or four. “Everyone wants to get out there!” says Serena knowingly.

We ask Serena if she could imagine going into space. “Maybe for a week, but six months would be pushing it.” She would rather travel the world. She’s particularly drawn to Africa and just returned from her second trip to Zimbabwe.

Serena Bertone
“We actually live on the biggest, most beautiful spaceship there is.”

But she thinks it’s great fun to accompany the astronauts as they prepare for their missions. We return to the foyer to say our goodbyes. What has been her career highlight to date? Serena promptly responds: “I got the chance to look after Italian astronaut Paolo Nespoli’s friends before he went into space.” This is another of the EAC’s jobs. She trained Nespoli for a special experiment and he asked her whether she’d like to come to Russia with him. So in July 2017, she accompanied his loved ones to Moscow, where they toured the capital and Star City. From Moscow, they all then flew to Baikonur in Kazakhstan to view Paolo’s launch: “Even though we were watching from two kilometers away, we felt the ground tremble beneath our feet,” says Serena. “That was a special experience.” 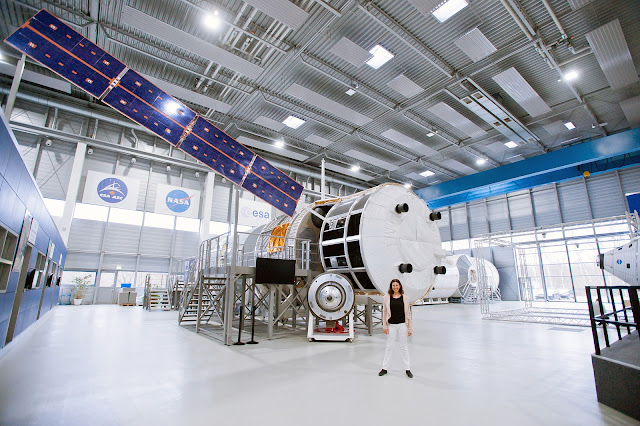 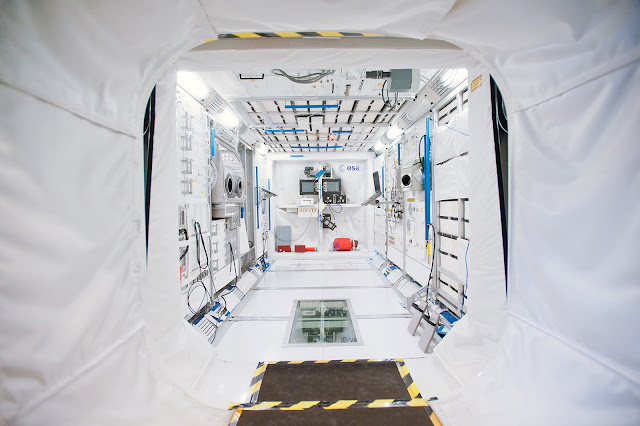 The Columbus module with its science lab © Felix Mayr


The European Astronaut Center was established in 1990 near Cologne. The EAC is responsible for selecting European astronauts, preparing and conducting basic training courses, advanced training, and training for missions on the International Space Station.


Serena Bertone was born in a small town north of Torino, in the north-west of Italy. She was always been passionate about space and the Universe and studied physics at the University of Torino where she also achieved a doctorate in Astrophysics. During and after the doctorate she has been working at the Max Planck Institute for Astrophysics in Garching (Germany) for three years. From there she moved to the University of Sussex in UK for three years, and then to the University of California in Santa Cruz (USA) for another three years as a post-doctoral scientist. For almost ten years she conducted research in galaxy formation and cosmology, with a focus on the evolution of the intergalactic medium. In 2010 she decided to experiment with a new career path and, after spending some time travelling in Europe and Africa, landed at the EAC where she is working on behalf of Telespazio Vega Deutschland GmbH.
Posted by esplaobs at 4/06/2018 08:55:00 PM