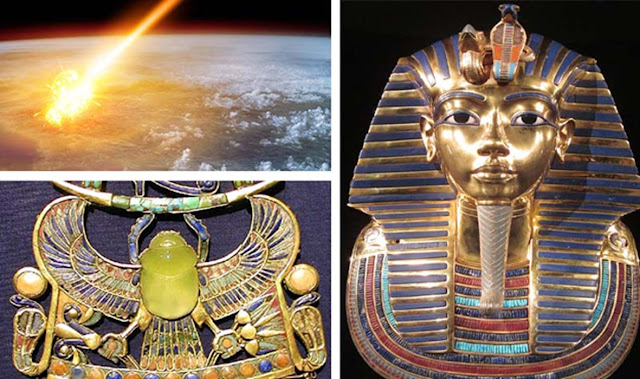 When Howard Carter and Lord Carnarvon first discovered the chambers of treasures of the 18th Dynasty pharaoh Tutankhamun in 1922, it was a phenomenal event in historical discovery. One remarkable, though tiny, component of that haul was result of a phenomenal event that occurred 28 million years earlier. The impact of this incomprehensively ancient comet that had come hurtling through the cosmos to collide with the Earth, created a component which was subsequently used as the centerpiece of King Tut’s brooch.

Small but Significant
The findings at the tomb of Tutankhamun were numerous and a small artifact such as a brooch might be over-shadowed by the weightier items. But oftentimes unassuming items have a deeper story than is at first evident. This impressively preserved brooch has such a deep history it could not be imagined and it came to light only through thorough research from multiple disciplines. The brooch contains a striking yellow-brown scarab composed of a yellow silica glass stone procured from the sand of the Sahara and then shaped and polished by some ancient Egyptian artisan. It is this scarab that has perhaps the most interesting history of all. 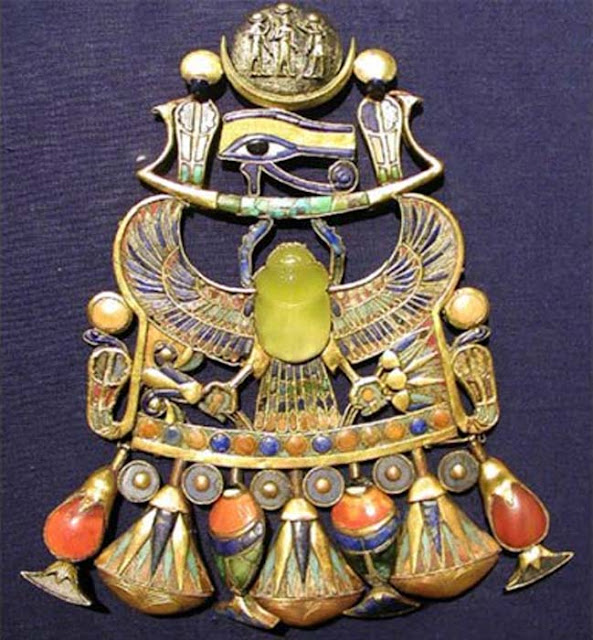 
Unlocking the Sands of Time
Chemical analysis revealed that the silica glass from this desert was originally formed 28 million years ago, when a comet entered the earth's atmosphere above Egypt. The sand beneath it was heated to a temperature of about 2,000 degrees Celsius and resulted in the formation of a huge amount of the yellow silica glass, which lies scattered over a 6,000-square kilometer area in the Sahara Desert.

The silica glass was one of the clues that led Professor Jan Kramers of the University of Johannesburg, South Africa, and colleagues to the remarkable discovery.  The other key find was a small black diamond-bearing pebble, which the researchers named ‘Hypatia’, that had been found by an Egyptian geologist several years earlier. This gave the clues needed to detect the cataclysmic event and the resulting composition of the desert. The detection of tiny diamonds within the stone which are the result of extreme pressure usually deep within the earth’s crust showed it to be remarkable. This pebble was found on the surface and so the diamonds formed were the result of a massive shock – an impact of some kind. The study team’s conclusions were that the pebble represented the very first known specimen of a comet nucleus (rather than an ordinary meteorite) and provided the first definitive proof of a comet striking Earth millions of years ago. 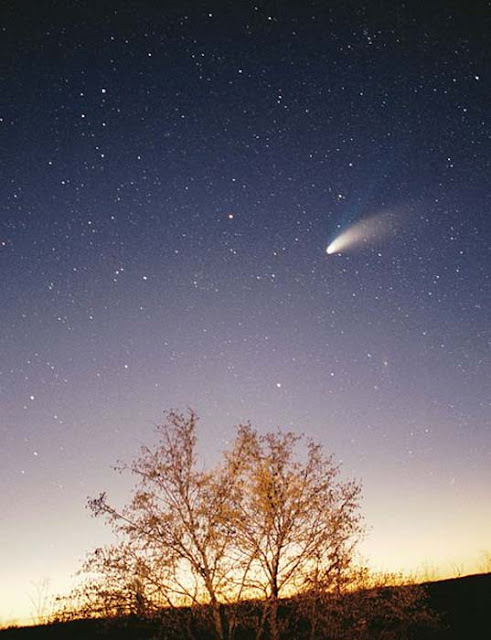 Comet Hale-Bopp taken in the vicinity of Pazin in Istria/Croatia ( CC BY SA 2.0 )


Unprecedented
Comet material had never been found on Earth before except as microscopic sized dust particles in the upper atmosphere and in Antarctic ice. Space agencies have spent billions to secure the smallest amounts of pristine comet matter and bring it back to Earth, but Kramers and her team have a new approach for studying this material without having to go to space to get it.

“Comets contain the very secrets to unlocking the formation of our solar system and this discovery gives us an unprecedented opportunity to study comet material first hand," said Professor David Block of Wits University, a key researcher on the team.

To date the research program has developed into an international collaborative including scientists drawn from a variety of disciplines.