If there's life on Mars, it could have a cousin on Earth: halobacteria. Astrobiologists have long thought that the salt-loving extremophile might be able to survive conditions on the Red Planet. To find out, the students of Earth to Sky Calculus have flown approximately 100 billion of the microbes to the stratosphere. They're inside these test tubes 113,241 ft above the snow-capped Sierras of central California: 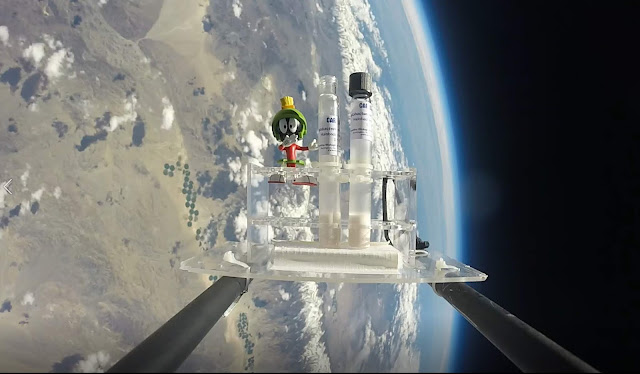 The microbes hitched a ride on a cosmic ray balloon, which the students launch about once a week to monitor atmospheric radiation. After a 3-hour flight on April 28th, they parachuted back to Earth, landing in a Joshua Tree forest in western Nevada.

Why send halobacteria to the stratosphere? Because conditions in Earth's stratosphere are remarkably similar to the surface of Mars: low air pressure, strong ultraviolet radiation, extremely low temperatures, intense cosmic rays. Visiting the stratosphere is like taking a trip to the Red Planet. The microscopic astronauts are now being cultured in an incubator in Earth to Sky's makeshift biology lab. Stay tuned to learn how many survived.