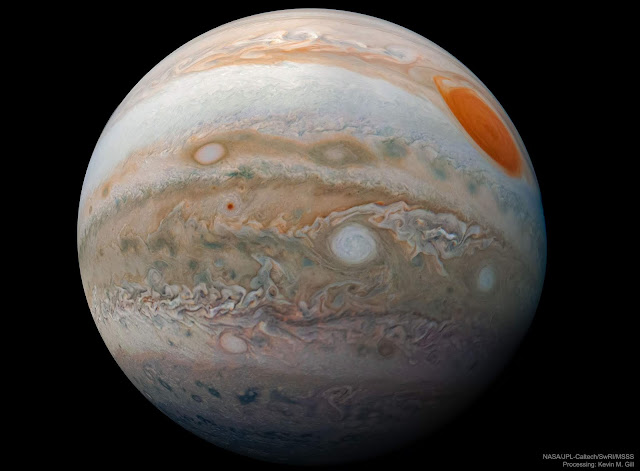 What does Jupiter look like up close? Most images of Jupiter are taken from far away, either from Earth or from a great enough distance that nearly half the planet is visible. This shot, though, was composed from images taken relatively close in, where less than half of the planet was visible. From here, Jupiter still appears spherical but perspective distortion now makes it look more like a marble. Visible on Jupiter's cloud tops are a prominent dark horizontal belt containing a white oval cloud, and a white zone cloud, both of which circle the planet. The Great Red Spot looms on the upper right. The featured image was taken by the robotic Juno spacecraft in February during its 17th close pass of our Solar System's largest planet. Juno's mission, now extended into 2021, is to study Jupiter in new ways. Juno's data has already enabled discoveries that include Jupiter's magnetic field being surprisingly lumpy, and that some of Jupiter's cloud systems run about 3,000 kilometers into the planet.
Posted by esplaobs at 5/08/2019 08:57:00 PM