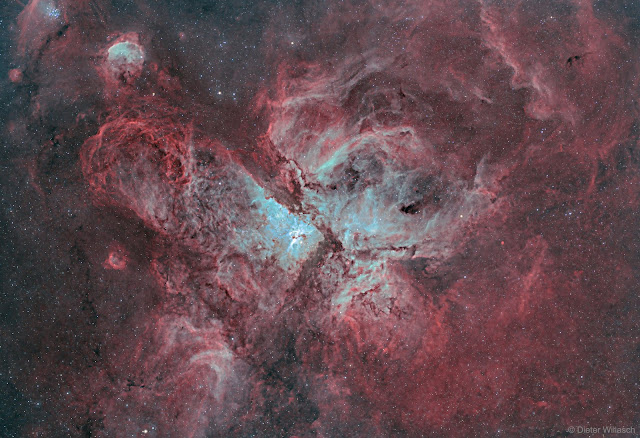 What's happening in the center of the Carina Nebula? Stars are forming, dying, and leaving an impressive tapestry of dark dusty filaments. The entire Carina Nebula, cataloged as NGC 3372, spans over 300 light years and lies about 8,500 light-years away in the constellation of Carina. The nebula is composed predominantly of hydrogen gas, which emits the pervasive red glow seen in this highly detailed featured image. The blue glow in the center is created by a trace amount of glowing oxygen. Young and massive stars located in the nebula's center expel dust when they explode in supernovae. Eta Carinae, the most energetic star in the nebula's center, was one of the brightest stars in the sky in the 1830s, but then faded dramatically.
Posted by esplaobs at 5/07/2019 11:23:00 AM