JUST ONE WEEK UNTIL THE TRANSIT OF MERCURY


One of the biggest astronomy events of the year is just one week away: The Transit on Mercury. On Monday, Nov 11th, Mercury will pass directly in front the sun. The rare transit begins at 12:35 UT (7:35 am EST) and lasts for almost six hours. Mercury's tiny form—jet black and perfectly round—will glide slowly across the solar disk, like this:

Credit: Tom Polakis of Tempe AZ made this movie of a previous Mercury transit on May 9, 2016.

People in every continent except Australia can see at least a portion of the crossing. In the USA, the best place to be is on the Atlantic coast, where the entire transit will be visible. On the Pacific coast the transit will already be in progress at sunrise.
Warning! Do not stare at the sun during the transit. Mercury covers only a tiny fraction of the solar disk, so the sun remains as bright as ever. Eye damage can occur. 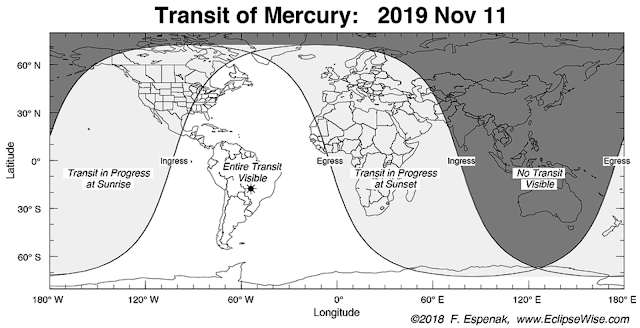 Ordinary eclipse glasses will keep your eyes safe, but they won't do much to help you see tiny Mercury. The planet is only 1/194th of the sun's apparent diameter. To watch this event, a safely-filtered telescope with a magnification of 50x or more is recommended. Don't have a filter? No problem. Images of the transit may be easily projected onto a wall or screen through an unfiltered telescope. Just do not look through the eye piece!

Nothing beats a telescope equipped with an H-alpha filter. H-alpha filters are narrowly tuned to the red glow of solar hydrogen. They reveal the sun as a boiling inferno cross-crossed by dark seething magnetic filaments. On Nov. 11th, the tiny form of Mercury will navigate this starscape. Here's a sample H-alpha image taken during the last transit of Mercury on May 9, 2016: 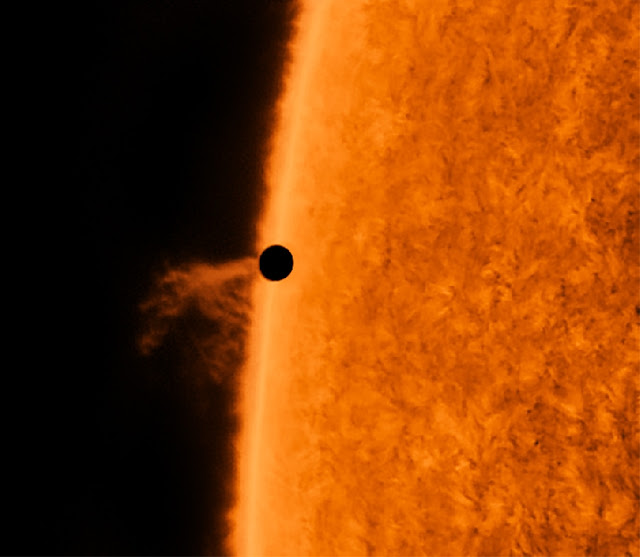 Paul Andrew took the picture from his backyard observatory in St. Margarets at Cliffe, Dover, UK. "The background prominence made Mercury look like it had a comet's tail," he says. More images may be found here and here.