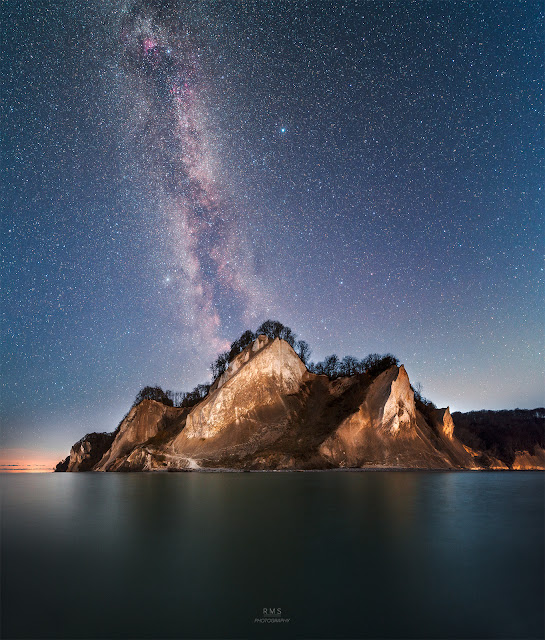 From Big Bang to Møns Klint Denmark's natural Opera House I can clearly remember, when my friend Ole asked me a couple of month ago: “Wouldn’t it be cool to sail to the cliff and photograph it at night?”. All respect to him, but I had to say it straight away: “Your idea is pointless, as it’s impossible to photograph anything with long exposure on the water”, as there will always be waves, especially if you are in the open sea. At that time I couldn’t even imagine how serious Ole’s idea was… After I dropped the idea behind photographing Møns Klint under the Milky Way from the Baltic Sea – we came back to this discussing in the beginning of October. The major change was that we were going to weld a large tripod, which is going to be placed on the bottom of the sea with the camera on top of it. Next time I met Ole in the workshop, our tripod was already finished. It turned into a 3-meter high construction made of iron with a ball-head on top. When we came to the day, when both weather and wind forecast was matching our requirement, we finally sailed to the Cliff on M/S IDA on October, 30th. As we arrived to the location, I was totally fascinated by the Milky Way, which was setting behind the cliff’s white chalk teeth. Just being out there, in front of the Møns Klint and looking several billion years back in time felt like travelling in space. We became the first crazy and passionate people, who made the first nightscape photograph of the Møn’s cliffs ever, taken from the 2,5m depth 100m from the shore. Canon EOS 6D + Sigma 14mm f/1.8 ART Panorama of 6 single exposures @ 30'', f/1.8, ISO 2000