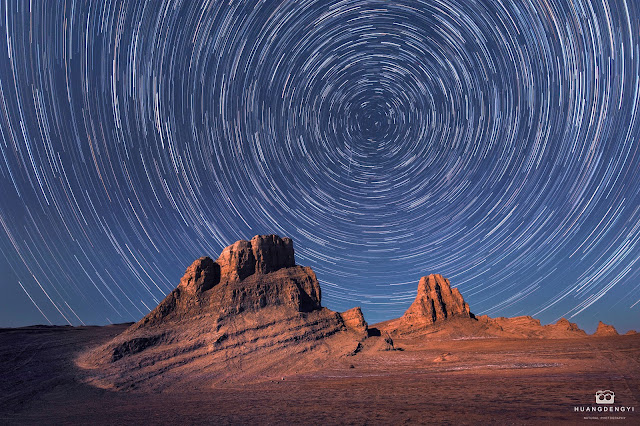 Does Mars have a north star? In long exposures of Earth's night sky, star trails make concentric arcs around the north celestial pole, the direction of our fair planet's axis of rotation. Bright star Polaris is presently the Earth's North Star, close on the sky to Earth's north celestial pole. But long exposures on Mars show star trails too, concentric arcs about a celestial pole determined by Mars' axis of rotation. Tilted like planet Earth's, the martian axis of rotation points in a different direction in space though. It points to a place on the sky between stars in Cygnus and Cepheus with no bright star comparable to Earth's north star Polaris nearby. So even though this ruddy, weathered landscape is remarkably reminiscent of terrain in images from the martian surface, the view must be from planet Earth, with north star Polaris near the center of concentric star trails. The landforms in the foreground are found in Qinghai Province in northwestern China.
Posted by esplaobs at 11/30/2019 11:45:00 AM