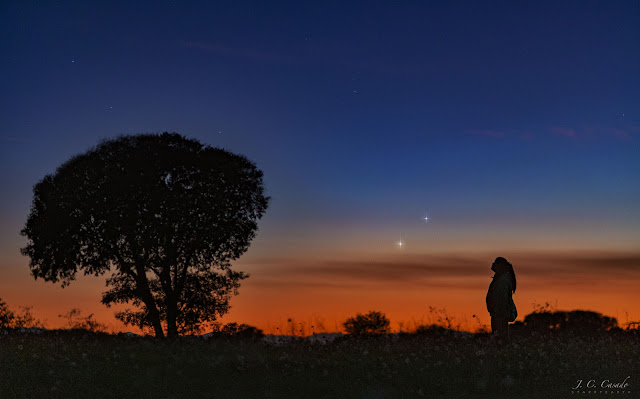 What are those two bright objects on the horizon? Venus and Jupiter. The two brightest planets in the night sky passed very close together -- angularly -- just two days ago. In real space, they were just about as far apart as usual, since Jupiter (on the right) orbits the Sun around seven times farther out than Venus. The planetary duo were captured together two days ago in a picturesque sunset sky from Llers, Catalonia, Spain between a tree and the astrophotographer's daughter. These two planets will continue to stand out in the evening sky, toward the west, for the next few days, with a sliver of a crescent Moon and a fainter Saturn also visible nearby. As November ends, Jupiter will sink lower into the sunset horizon with each subsequent night, while Venus will rise higher. The next Jupiter-Venus conjunction will occur in early 2021.
Posted by esplaobs at 11/26/2019 11:44:00 AM