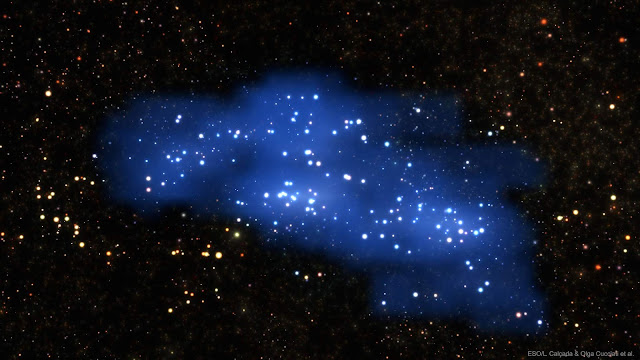 How did galaxies form in the early universe? To help find out, astronomers surveyed a patch of dark night sky with the Very Large Telescope array in Chile to find and count galaxies that formed when our universe was very young. Analysis of the distribution of some distant galaxies (redshifts near 2.5) found an enormous conglomeration of galaxies that spanned 300 million light years and contained about 5,000 times the mass of our Milky Way Galaxy. Dubbed Hyperion, it is currently the largest and most massive proto-supercluster yet discovered in the early universe. A proto-supercluster is a group of young galaxies that is gravitationally collapsing to create a supercluster, which itself a group of several galaxy clusters, which itself is a group of hundreds of galaxies, which itself is a group of billions of stars. In the featured visualization, massive galaxies are depicted in white, while regions containing a large amount of smaller galaxies are shaded blue. Identifying and understanding such large groups of early galaxies contributes to humanity's understanding of the composition and evolution of the universe as a whole.
Posted by esplaobs at 10/23/2018 08:09:00 AM